Prohibition was in effect from 1919-1933 and when the Spanish Revival Hotel Del Monte opened in 1926, the distribution and sale of alcohol was illegal. The architectural rendering below designated the room which is now the Trident Room as "The Children's Playroom". Perhaps the nomenclature was a bit of hotel humor. Within a week of the repeal of Prohibition in December 1933, Hotel Del Monte dedicated this as the Del Monte Tap Room. 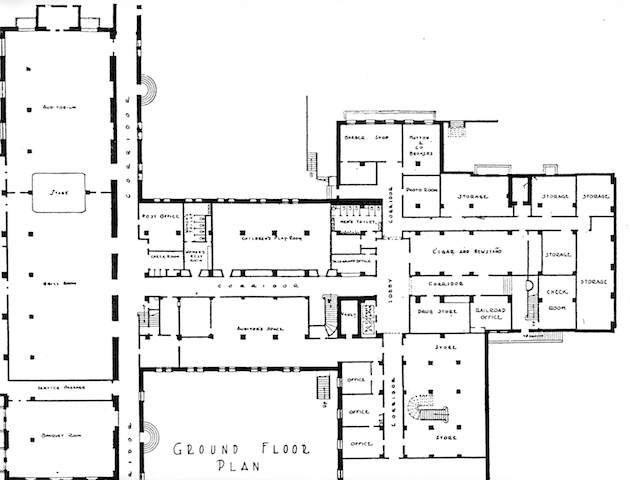 Artists Armin Hansen and Paul Whitman were commissioned to paint a large mural for the Tap Room. The World War II photo below shows the mural in the background, suspended from the ceiling. It also shows the Navy using the bar as a soda fountain. 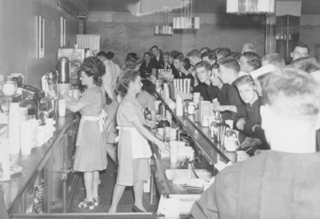 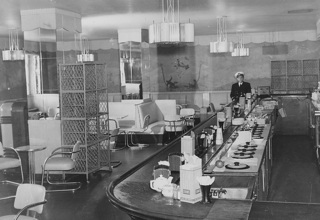 (Above) Lt. Rollo Payne stands by the soda fountain. (Below) The Navy christened it as the Trident Room in 1953. Rear Admiral Frederick Moosbrugger, a WWII hero and NPS superintendent, cut the ceremonial ribbon. The ribbon cutting photo, published in the school's command newspaper, is posted in a display case by the Trident Room door. 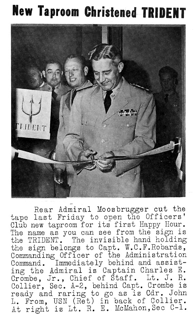